Most of you have probably heard about the London based nail studio WAH Nails and the gorgeous designs they do. I've been interested in them for a while and when I was recently in London I decided to make an appointment with them. I chose their studio at Topshop in Oxford Street, so I can only speak for that one.
Originally I wanted to make an appointment for clear overlays and a design, emailed them about it, but after the initial email of yes, I can make an appointment via email and yes, they do custom nail art, I didn't receive any replies. I decided to wait, but when the day I went to London I still hadn't heard from them I tried to email them again, gave them my phone number (as I wouldn't have internet access from then on) and before I even managed to switch my laptop off I'd already received their reply saying they would be in touch that day. They were not, in fact, in touch with me that day or the day after. By Sunday I decided to pop in and try and figure this out in person. Long story short, I did have an appointment, but nobody had actually told me. That was slightly annoying, because had I known, I wouldn't have had to make the trip there and wasted time. Props to them for offering me an appointment that day before they figured out I already had one, though.
Anyway. On to the fun stuff! I couldn't get the overlays, which in hindsight might have been for the best. I'm way too whimsical to make such a commitment. For the nail art I wanted something Alice in Wonderland themed and let me tell you right away, I couldn't have possibly imagined anything this awesome when I said "Let's see if they can do something like that!".
Left hand: 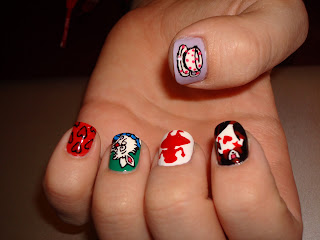 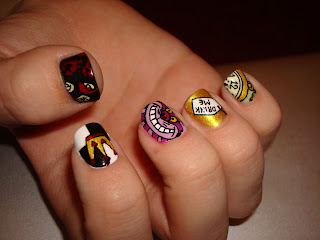 How amazing is that?! I was absolutely in love with the designs. I still am, actually.
It lasted about five days on me. I applied a coat of Seche Vite every other day, which made it last longer at first, but I think the third coat was too much. Might have been able to wear it longer without that. Ah, well.
The design cost about 45€ (can't remember how much exactly, since I bought a bunch of polishes at the same time and threw the receipt away.), which I think is a fair price. The girls there were all super nice, too.


Overall, even with the trouble abotu making an appointment, I'm very satisfied with the outcome. I would absolutely do this again and as soon as I'm in the UK again, I will! If you're into nail art and like to get your nails done, I would definitely recommend checking them out!