Today I'll be showing you a case of "this polish was a mess so I put some glitter on top" :D 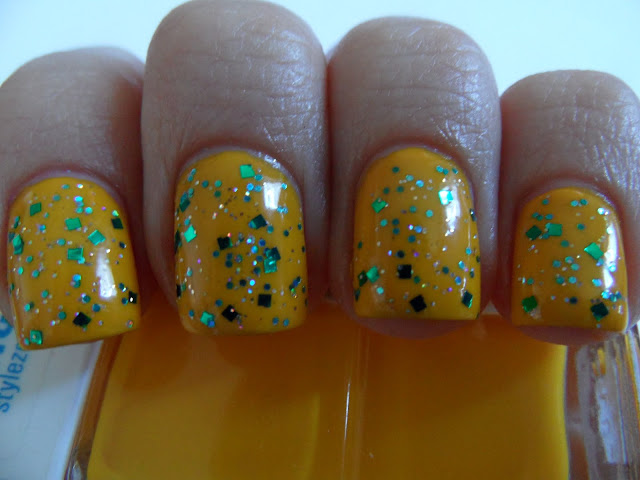 I started out with She Stylezone 300 (ugh. I hate when polishes only have numbers and no names...even if this one makes me want to yell THIS. IS. SPARTA! Um, yes. ANYWAY.) which is an egg yolk yellow creme. It does have that Essie-esque squishy texture, though. Unfortunately this was a complete and utter mess on my nails. The brush was floppy but the bristles would not freaking budge, so it was really hard to create a nice line along my cuticles. After three coats I gave up; there were bald patches all over the place and the polish was already super thick. I like this colour A LOT, but it's not super unique so I don't really see myself putting up with the crappy application again.

When it became apparent that this mani was not turning out so well I figured I'd add some glitter and see if it would save my nails. I chose Essence Edward, which I've been wanting to try for a while now. Edward is teeny tiny silver holo glitter, slightly larger turquoise glitter and large square turquoise glitter in a clear base. It looks really green with the yellow, but in the bottle it's definitely more turquoise/aqua. I love this glitter. <3 It is a little tricky to place the square pieces of glitter, but not too bad.

Surprisingly I ended up liking this mani. I'm still wearing it and not sick of it yet. I love when I turn horrible manis into something pretty by accident. :)

Do you ever end up turning a fail mani into something you like by accident?
Posted by Madita at 16:24