I hope you all had a good weekend! Mine was somewhat exhausting, but fortunately I picked up these new Essence polishes from their spring Blossoms etc  collection and had something to look forward to. There's a total of five polishes in the collection, but I only got these four. 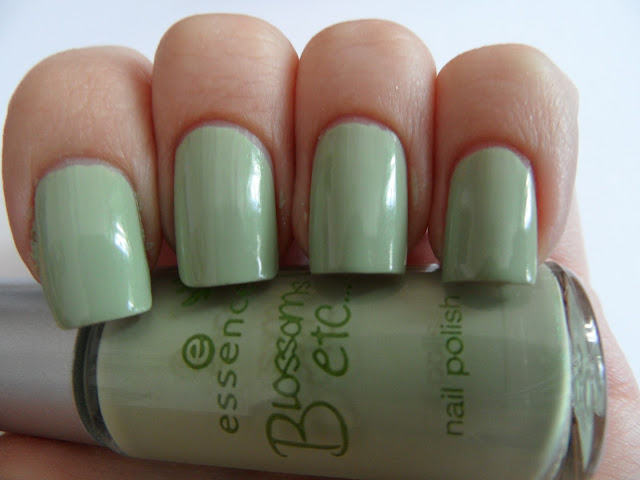 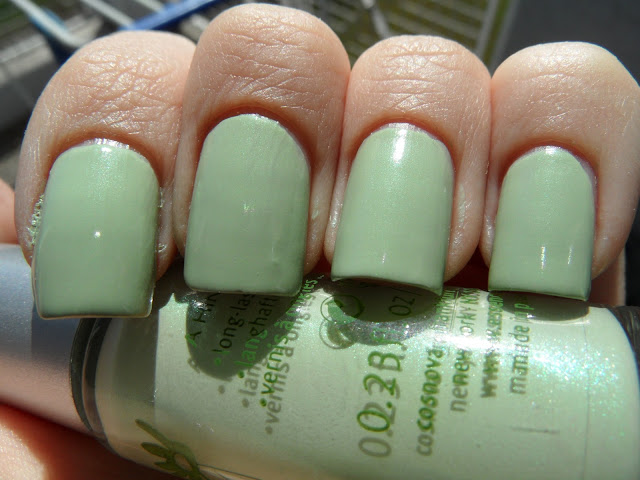 A Hint Of Mint is a pale spring green with subtle green shimmer. I know, the shimmer barely shows up in the pictures, but it is visible in person. I found this one's name a little misleading, since I wouldn't describe this as a minty colour at all. Maybe that's just me, though.This is two coats. Formula was nice and application smooth. This does tend to highlight every ridge and flaw of my nails so I'll probably end up doing three coats when I wear this. Very pretty, though. 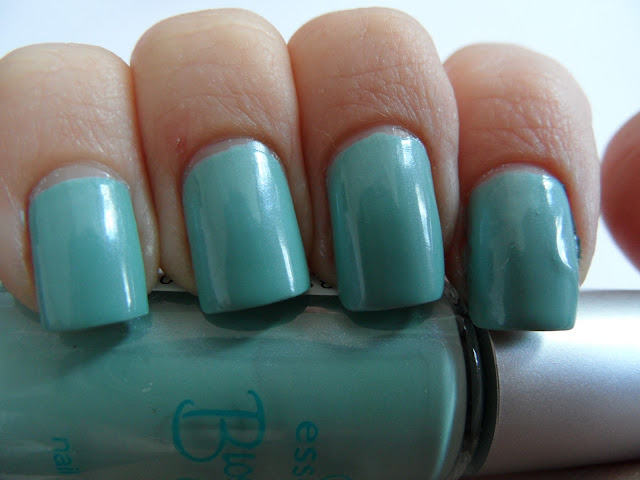 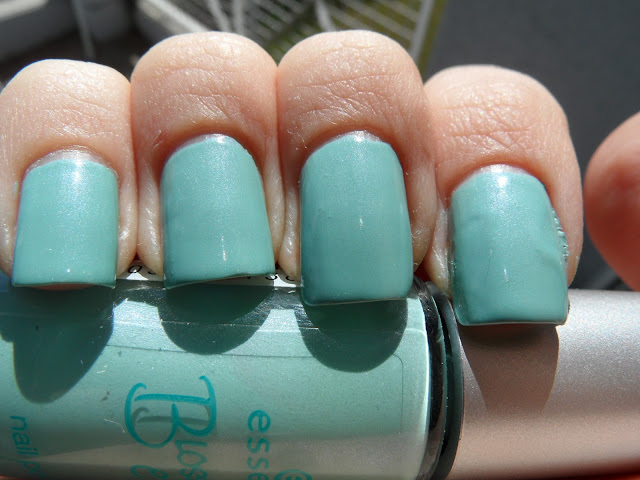 I Like is a nice, pale turquoise with silvery blue shimmer. It's slightly less bright than it looks here. Again, two coats, nice formula and application. (Do ignore my index finger; managed to scrape nearly everything off as I was trying to take a pic. And ignore the weird way I'm holding the bottle. And how wonky my fingers/nails look. First and last time I attempted taking a pic with my left hand.) 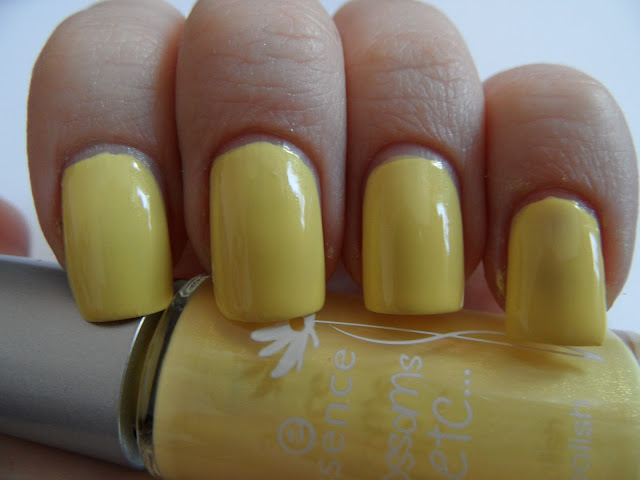 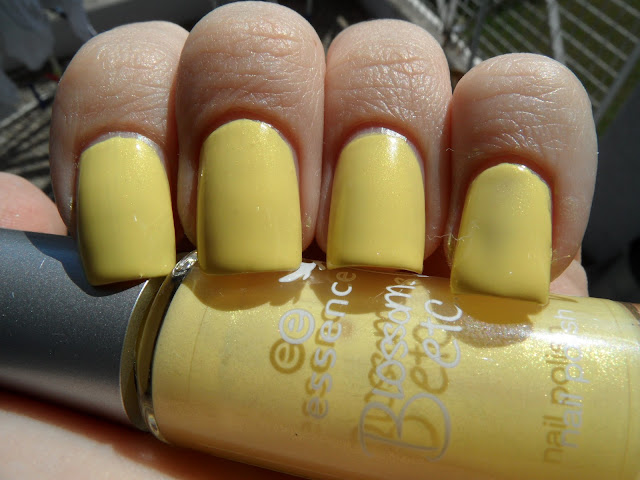 My Yellow Fellow is a very pretty pastel yellow with pale gold shimmer. This did need three coats for opacity and not to get it smooth and even, for a change. The formula on this was a bit thin, bordering on watery, and thus rather sheer, but it builds up nicely and I didn't have any trouble with application. 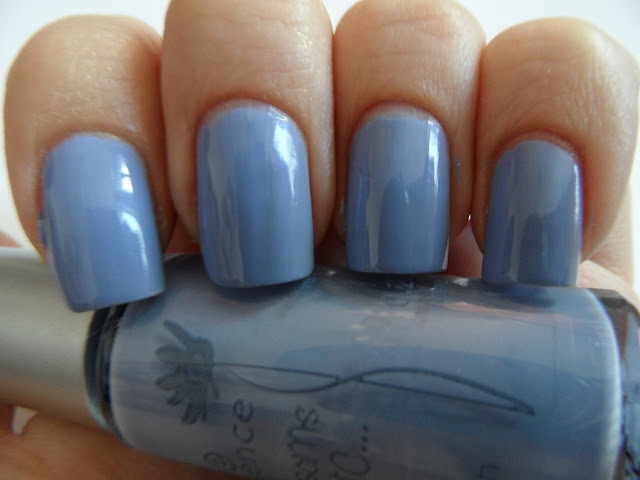 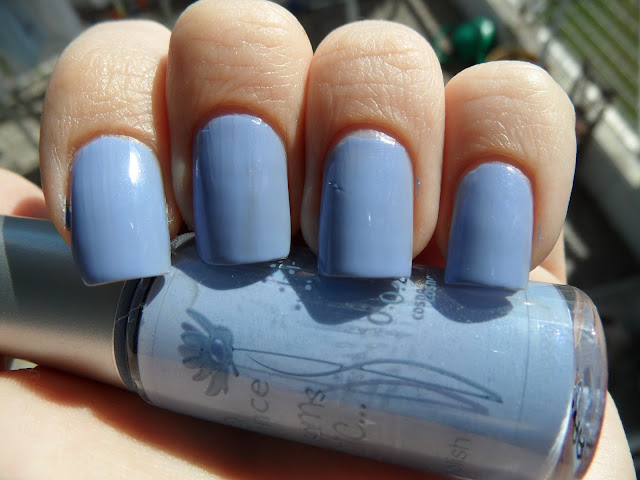 Forget Me Not is a pale cornflower blue with blue shimmer. I do think this is my favourite in the collection. This is two coats and, as My Yellow Fellow, the formula on this one was a bit runny and thin, but didn't give me any trouble.

As I said, there's a fifth colour in the collection that I wasn't interested in.

On the whole I'm really pleased with these. I haven't worn them yet, but I can't wait to! The formula was a bit inconsistent, but easy to manage and nice. One thing I did notice is that the brushes on these seem to be longer and slightly broader (though nowhere near, say, OPI) than on regular Essence polishes. Personally, I think this made application easier and smoother.

Two things that I don't find that great: the bottles are tall and thin and rather easy to knock over and though the shimmer isn't all that prominent on the nails (though definitely there!) it does stick to my nails after I've removed the polish.

In conclusion: I really like these. I like the colours and I like that they all have a bit of shimmer in them, which makes them stand out in the midst of all those pastel cremes. I also like the formula and brushes. If you like these kinds of colours I would definitely recommend picking them up!
Posted by Madita at 19:01